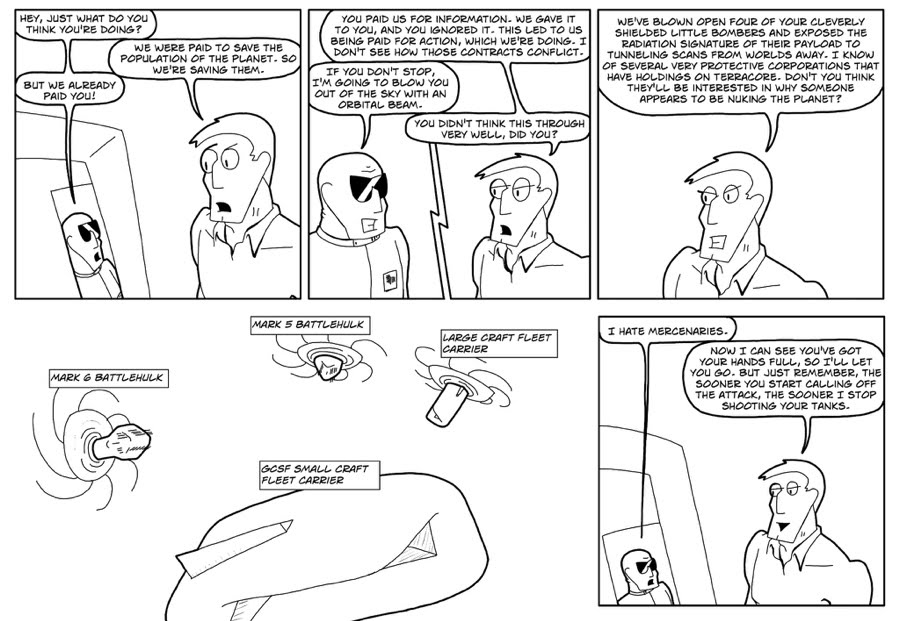 Note: The interested reader may want to know that tunneling scans is a shorthand term for Micro Wormhole Tunnel Scans, which is an active scanning technology that uses tiny wormholes to gather information much faster than the laws of physics would normally allow. Without that technology, the furthest battlehulk from Terracore would have taken a more than a year to realize the planet was being nuked.

Transcript
Guy: Hey, just what do you think you’re doing?
Boss: We were paid to save the population of the planet. So we’re saving them.
Guy: But we already paid you!
Boss: You paid us for information. We gave it to you, and you ignored it. This led to us being paid for action, which we’re doing. I don’t see how those contracts conflict.
Guy: If you don’t stoop, I’m going to blow you out of the sky with an orbital beam.
Boss: You didn’t think this through very well, did you?
Boss: We’ve blown open four of your cleverly shielded little bombers and exposed the radiation signature of their payload to tunneling scans from worlds away. I know of several very protective corporations that have holdings on Terracore. Don’t you think they’ll be interested in why someone appears to be nuking the planet?
Shot of the carrier in space, behind which two battlehulks and another carrier are emerging from wormholes.
Guy: I hate mercenaries.
Boss: Now I can see you’ve got you hands full, so I’ll let you go. But just remember, the sooner you start calling off the attack, the sooner I stop shooting your tanks.
Email ThisBlogThis!Share to TwitterShare to FacebookShare to Pinterest