Transcript:
Narration: Boarding one interstellar craft from another presents a number of unique challenges. First you have to get past the hull and energy shields, both of which are typically designed to scramble and dissipate incoming energy. The Eclipse gets around these problems with the same level of style and tact she does everything else.
Picture of Eclipse crashed nose first into another ship.
No comments:
Email ThisBlogThis!Share to TwitterShare to FacebookShare to Pinterest

Transcript:
Pex: KERZ Corp called up a while ago. They got a cargo ship out here without power, and they want her brought in.
Kid: Can't we just bend her in alongside us? Why are we boarding?
Boss: KERZ didn't have detail on what happened to the ship. We'll say it was plundered by pirates.
Pause
Kid: Ah. So we'll have our cake and eat it too.
Pex: You should know by now, the Boss always eats his cake.
Boss: Mmm, plunder-cakes are my favorite.
No comments:
Email ThisBlogThis!Share to TwitterShare to FacebookShare to Pinterest

Transcript:
Kid: Sometimes I feel like the boss doesn't understand me.
Kid: I feel like everyone else gets catered to at least a little, but never me.
Kid: I've got desires! I've got aspirations!
Boss: Good, now why don't you 'aspire' to go suit up. We got a job.
No comments:
Email ThisBlogThis!Share to TwitterShare to FacebookShare to Pinterest

Transcript:
Kid: How long have you been on the ship, Eddie?
Eddie: Ah... can't remember, actually. Why do you ask?
Kid: I've ben here exactly a year today.
Eddie: Whoa, congrats, Kid!
Pause
Kid: Turns out a year is about long enough for a person to forget their own name.
Eddie: Don't worry, I'm sure somebody wrote it down somewhere.
No comments:
Email ThisBlogThis!Share to TwitterShare to FacebookShare to Pinterest

Transcript:
Eddie: So dude, does Jackman have a thing for you?
Kid: Jackman? Nah, she'd never look twice at any man.
Eddie: Kinda makes you wonder, doesn't it?
Kid: Wonder what, if she swings the other way?
Eddie: What? No, whether she's actually a man in disguise.
Kid: Uh... no. It doesn't make me wonder that at all, now you mention it.
No comments:
Email ThisBlogThis!Share to TwitterShare to FacebookShare to Pinterest

Transcript:
Eddie: Hey Kid, you got time for a drink?
Kid looks to Jackman
Jackman: Yes, you do.
Kid: Mom says I can come out and play.
Jackman: I am right here!!
No comments:
Email ThisBlogThis!Share to TwitterShare to FacebookShare to Pinterest 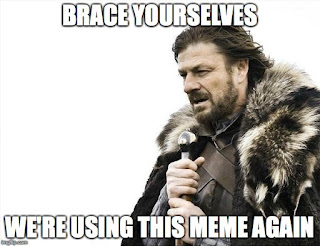 Okay. This took longer than I wanted it to, but I only have a finite number of hours in the day, and uh... video games, man.

But the point is that Book 2 of the webcomic will start airing next week, which will coincide with the beginning of artwork for Book 3. This storyline should run for about 3 months, by which time I'll hopefully be ready to go on the next one.

Along with the beginning of Book 2, you'll notice a few other things changing around here. First of all, yes, the website design is different. I think it looks better and cleaner now. Second, you'll see a link to a Patreon page coming later this week, along with a new tab along the top that will tell you what Patreon is and how you can support this webcomic. Then coming a little bit later down the line, you'll see the tab for the Hawkingnet Hub replaced by links to an external wiki that will make organizing the universe info for the comic easier. If there's anything here that will push out the release of Book 3, it's that last one. So I'll be making a concerted effort NOT to spend too much time world-building.

Oh, also, you may have noticed that the name of the comic is different. Ha, yeah. I was going to mention that. If you're wondering why that is, go Google "bender comic" and see what you come up with.

If you're scared to try that, let me reassure you it's not horrifying. It's just a bunch of random comics featuring Futurama's Bender. So to avoid obsessing over Google SEO (and to avoid the inevitable loss to Futurama), the comic is now rightly called A Starfarer's Guide to Freelancing. That title is in reference to an in-universe how-to book for making a career as an industry freelancer in a galactic population of trillions.

Yes, I know what it sounds like. And yes, the homage is intentional. But no, the books aren't similar. You'll see excerpts of the Starfarer's Guide coming later, if you want to compare.

That means we're also at a nice new fancy URL, so if you had bookmarked the page previously, you'll need to make a new bookmark. You can find the current comic every day at www.starfarersguide.com (which is where you are right now, actually).

Write it down. Tell your friends. And then keep your peepers on this space for continuing epic sci-fi space-opera web-comic... ness.
No comments:
Email ThisBlogThis!Share to TwitterShare to FacebookShare to Pinterest
Newer Posts Older Posts Home
Subscribe to: Posts (Atom)